We ran the Royal Parks Half Marathon last Sunday – and it was such a beautiful race! Here’s our verdict in full…

ROUTE: Taking in three of London’s most iconic royal parks (Hyde Park, Green Park and St. James’ Park) as well as passing by Big Ben and the Houses of Parliament before a quick trip alongside the Embankment, this is one of the most visually stunning races in England. The chance to run along the aforementioned roads, alongside Whitehall and through Admiralty Arch down onto the Mall before passing right by Buckingham Palace is pretty spectacular, and can normally only be partially achieved in the London Marathon.

The route takes in many of London’s most famous sites

But it’s the parks themselves that are the real winner here. Taking place just as the seasons are changing, and just early enough in the morning that it’s not too busy, the race gives you the opportunity to experience Hyde Park in particular at its finest. And when the weather is as good as it was last Sunday, there’s nowhere more appealing in London (except maybe Hampstead Heath) to run.

Personally speaking, however, the second half of the route was a bit circuitous. Having done six miles taking in some of London’s best sites, to then spend the remainder of the race twisting around Hyde Park’s often very slim paths, often coming back on yourself, was a bit dull. That said, it’s definitely a PB course, so it was a shame that I hadn’t trained enough.

TIME: 1:28:00 – a strangely round time! Started very well and managed to get near the front, so wasn’t caught up in the crowds, but the circling route near the end did affect my timing a bit, as I struggled to mentally pace myself against the miles on the twisting paths. As the target was sub 1:30 though, I was very pleased – placing 197th out of 16,000.

KIT: This was my first race wearing the much lusted-for Adidas Boost, and they did not disappoint. Beautifully light and flexible, they were comfortable and a joy to wear on 13.1 miles of mainly pavement running. They also stood up well to the grassy/dirt sections, gripping well on the slight inclines, and coping well on the cobbles too. 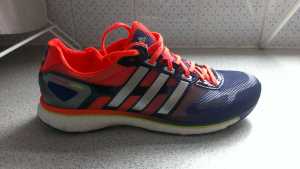 The ACTUAL SHOES worn by Mike during the race…and pretty good they were too!

There was some slight foot pain under the toes after around 4 miles which did cause me some alarm, but this seemed to fade as the race went on, so maybe it was a minor cramp. There was also a small blister on my heel, but this could also have been the socks. Overall, they were a resounding success.

OVERALL:  9/10 – It’s definitely a race I’d do again, and look forward to next year’s run. The only gripe was race organisation, with a massive event village meaning a long walk from the finish to the bag collection, which was very unwelcome after a long run! Asides from that though, pretty spot on.