Think you’re quick on your feet? ASICS lets you try your luck against one of the world’s best marathon runners

We here at TechRunner love a clever ad campaign, and ASICS’ 2011 Ryan Hall marathon pace billboard challenge was one of our favourites. Thankfully, the company resurrected the campaign last weekend to promote the 2013 ING New York City Marathon – only this time with a twist.

Two years ago, it was a billboard in a Subway station, allowing anyone passing by to try and keep up with elite U.S. marathoner Hall for just 60 feet. This year, in advance of the 2013 ING New York City Marathon, ASICS set up the “Treadmill Challenge”. 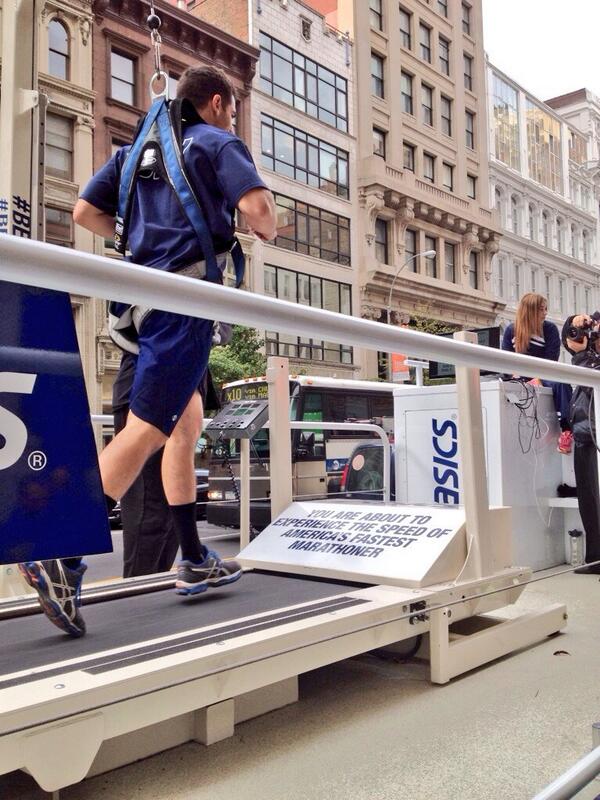 The company took to its website to promote,” a treadmill that only runs at the speeds of America’s fastest marathoners”, driving it around New York to let people jump on and see how long they can keep up.

And unsurprisingly, most people aren’t too hot on this kind of pace! The company’s YouTube page has several videos of people taking on the challenge, suspended by a safety harness so as to not suffer any damage, with the final record set at 12:49 – not too shabby by any accounts.

The treadmill was set at 12.6mph, equivalent to around a 4:46 miler pace – approximately what Hall runs to on a 26.2 marathon course – totally at around 2 hours and 10 minutes.

We think a UK version of this with Mo Farah or Paula Radcliffe could be pretty fun – anyone fancy giving it a go?