Getting people involved in exercise is always a challenge, and the NHS has tried a wide variety of tactics to try and get people to be more active. Now they are embracing gamification through the release of a new app, The Walk.

Developed with app-maker Six to Start, who previously made the excellent Zombies, Run!, The Walk encourages players to walk in order to progress through a story and unlock audio clips.

Described as a mix of North By Northwest and The 39 Steps, the game begins with a fictional explosion at Inverness station which knocks out transport and communications networks across the country.

Players then assume the role of a character called Walker, who has to carry a mysterious package the length of the country.

The game is designed to be constantly on and tracks how far players are walking in their everyday life. The further they walk, the more secrets of the story are unlocked, with the app’s developers believing it will take players around three months to complete all 65 episodes depending on how much walking they do.

The newly-launched app will be included in a research project at King’s College Hospital in London, as part of a study to examine how exercise can help treat patients with rheumatoid arthritis. 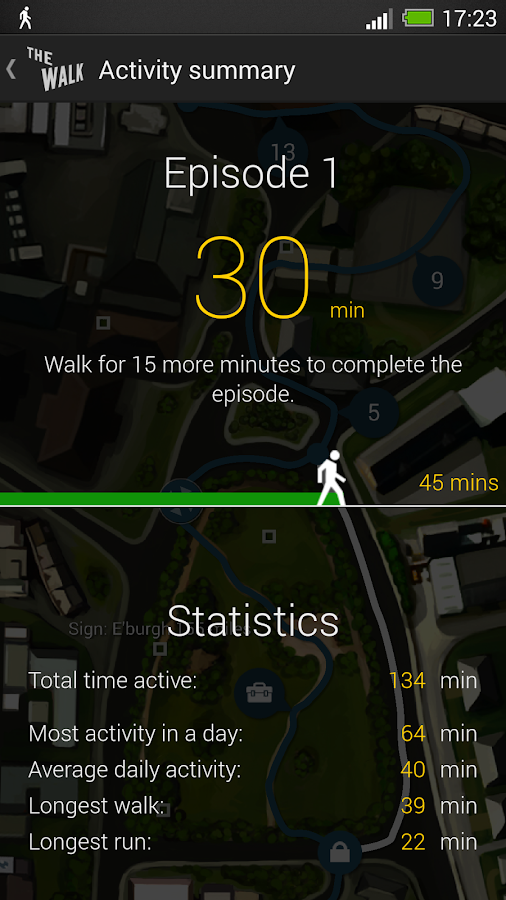 The app sees players embark on a 500-mile journey

Six to Start was given a six-figure budget from the Government to build the game after winning a competition to design an app to combat obesity. Speaking at The Walk’s launch, chief executive Adrian Hon said he hoped The Walk would be as successful as its last release.

“Zombies, Run! was huge for us, becoming the most successful smartphone fitness game in the world,” he said.

“As part of the project with the Department of Health, we promised to get more people fit so we broadened the appeal by making it about walking.

“We used practical advice from scientists and doctors with the aim to get people to walk an extra five or 10 minutes a day to get fit.”